Please join with us. 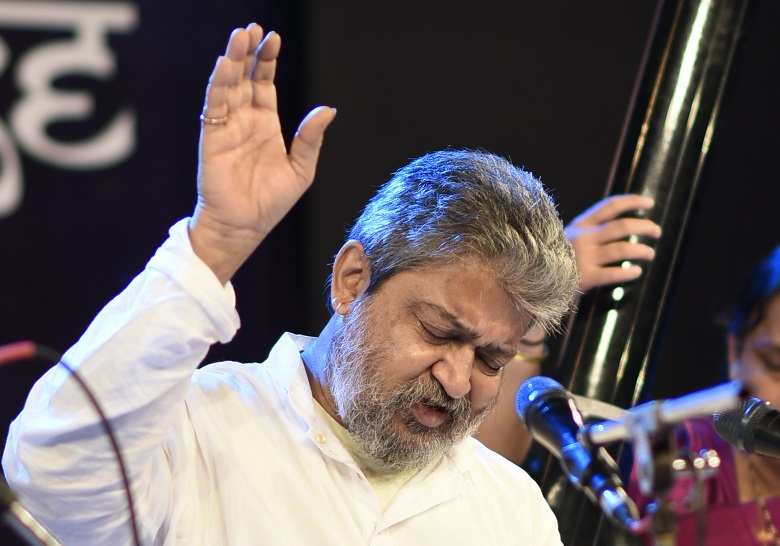 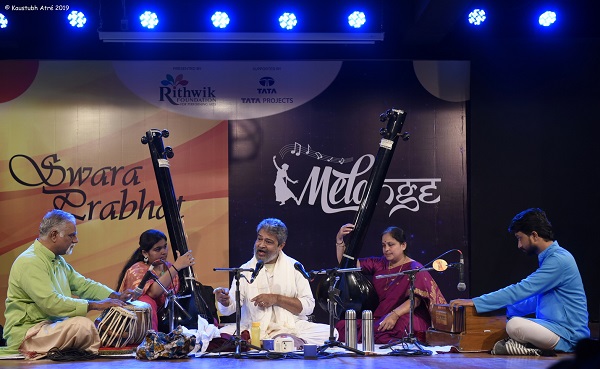 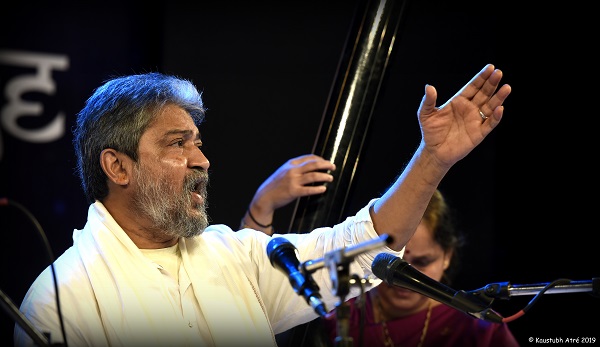 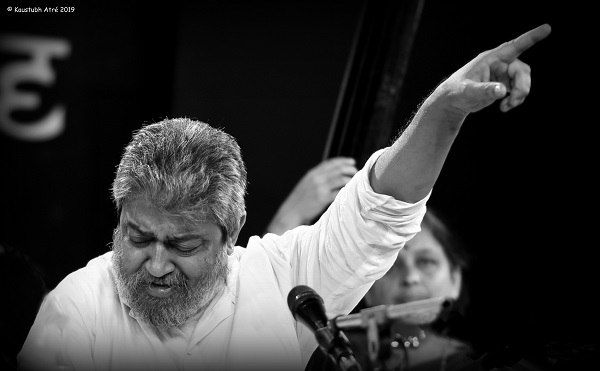 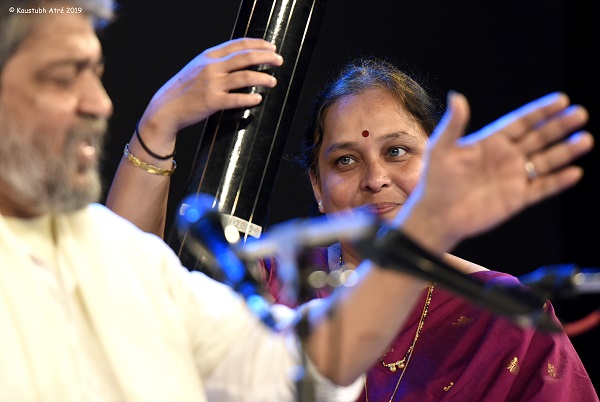 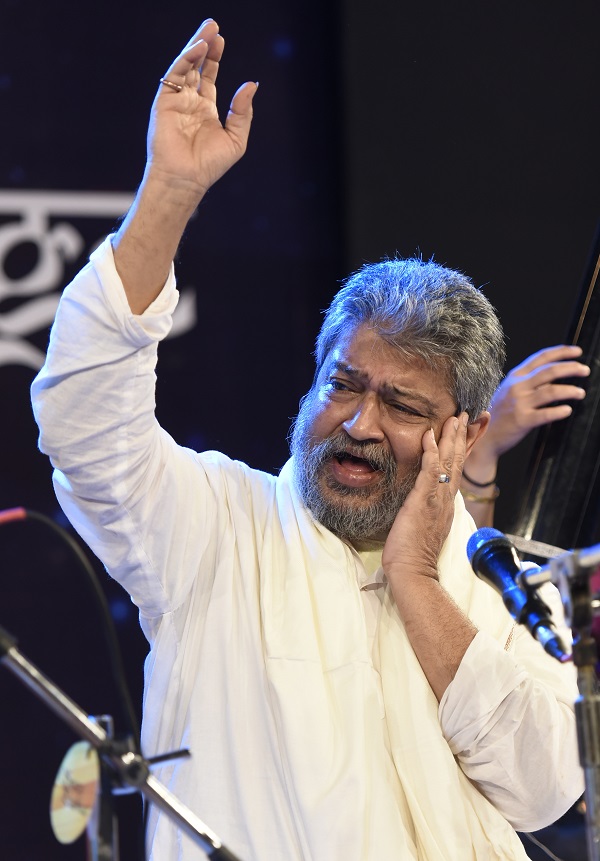 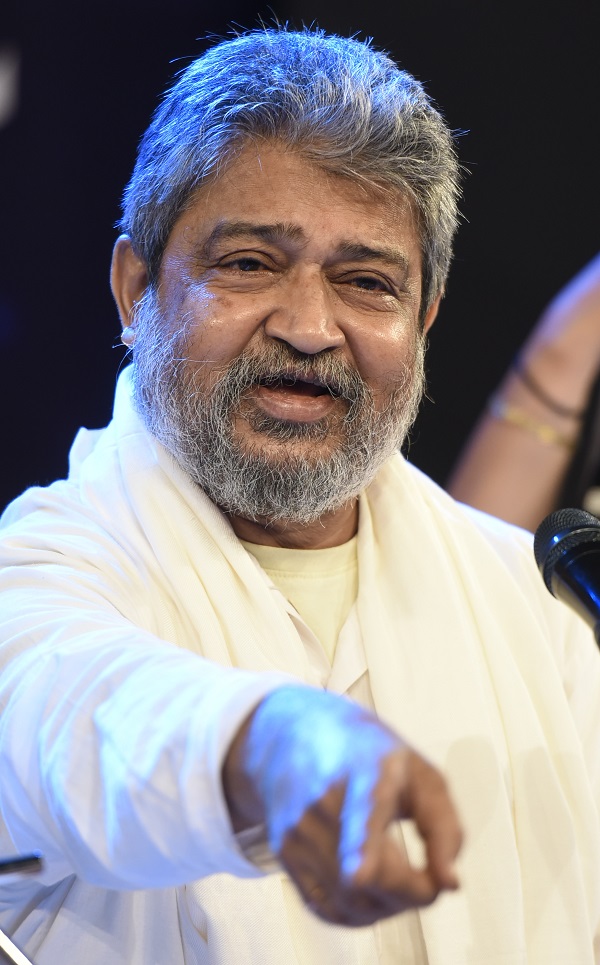 Translated by Aashay Gune (2017)
(Originally Written in Marathi by Priya Achrekar. Published in Diwali Issue of Marathi Magazine “Ityadi” in 2014)

As I write in my room, I hear the notes of Raag Khambavati charm the evening. In the other room, my brother Milind is discussing work with James, his British Boss, who suddenly exclaims, “Ohh, is he singing?” “Yes, it’s his riyaaz”, replies Milind. “Feeling so good, Milind! Let me listen a little more”, he pleads. The musical note that mesmerised James, who developed a longing for it despite sitting at the other end of the world was Pt. Mukul Shivputra’s! For he is the Gandharva whose music fascinates and mesmerises everyone across caste, creed, religion, region, language and all such categories which appear mundane and redundant! His Sur – a pure, sacrosanct musical note by itself isn’t bound to any words or prose; yet his method of selecting the compositions resembles the way a jeweller would choose the best gem out of many precious stones.

I do not exaggerate a bit when I say that all that he does is unique! When we read his prose and poetry in Sanskrit, Marathi or Hindi, we realise that God has conferred so much on him. While many writers find it challenging to maintain their expertise in more than one language, he has not only mastered three languages but has also added poetry to this expertise. In fact, in the world of music, Pt Mukul Shivputra is the only one who can compose a poem in Sanskrit. His hands sing when he creates a beautiful sculpture, whereas, in a music concert, his voice resembles a paintbrush! And when he paints, one cannot help but notice that his fingers possess a characteristic lilt that makes way for all the colors to create a beautiful concert on the canvas. And when he cooks, the taste makes an uncanny resemblance to a mother’s recipe! Though all this is unbelievable and indecipherable, we find that it happens with remarkable ease, without any deliberate intention of doing something special.

One feels that God spent a lot of time while creating someone like him. Here is a person who has a gift of the twin qualities of intelligence and memory. His ability to recall a particular incident or a paragraph from a book or someone’s behavior during a specific event or an occasion is so sharp and detailed that one wonders
if his brain scans them for him! He spent only five years of his life with his mother Bhanumatibai, but his ability to recall those special memories is unbelievable! He remembers being a part of the tour to Africa with her and retains the memories from that trip in great detail. Not only he remembers how Bhanumatibai taught him to memorise math tables till 30, but he also recalls the childhood pranks he played with Daaimaa. He also correctly recalls the day his mother was admitted to the hospital for her delivery, and remembers that he never saw her come back after that day.

He remembers every moment spent with Kanna mama, a man with whom he spent ten years of his life, from the age of 5 to 15! And he also remembers a feeling of emptiness when Kanna mama passed away. While accompanying Kumarji on his concert tours, while sleeping, he was always sandwiched between Vasantrao Achrekar and Govindrao Patwardhan. He remembers those nights clearly.
Mukulji remembers his unique friendship with Neetu Chaughule (daughter of Bandubhiyya Chaughule), their marriage and their brief married life of three and a half years. And he not only remembers every day of those three and a half years but also recalls every moment from those days! Though there is nothing much to remember, it is impossible to forget what happened in those days.
All that he possessed during the time he lived outside his house were these memories. And these memories were the reason he was ruined. It would have been better had these memories hazed with time, but in case of Mukulji, it was precisely the opposite. A man living with his family can overcome the pain and sorrow he faces because the family gives him the power to do so. But Mukulji had lost his home and his family, and all these memories became the reason for his pain and sorrow. The past occupied his present for all the twenty-four hours in a day and became the reason for all future problems in his life. And the thing which helped him overcome this was his music! Music, for him, became a support to wipe this past from his present, but that came with a hefty price, and that was the loss of sleep! There was a time when he could not sleep for twenty to twenty-five days at a stretch. Initially, the memories were the reason for this loss which was soon replaced by music. It was perhaps the most terrible time in his life; the year was 1982. He was twenty-five years old, and no one was willing to approach him, and understand him. And with him was his two and half- year-old son, who had just lost his mother.
He was now aware that the little one with him would find it difficult to live outside the house, but at the same time, he also realised that it would be difficult for him to live beneath the four walls of this house. Finally with a heavy heart and pain - difficult to even imagine or comprehend - he handed over his son to his father and turned around to leave the house. But alas, no one in the house felt the need to stop

him. Someone should have asked him where he was going and what his plans ahead were.
However, neither did anyone ask these questions, nor did Mukulji expect anyone to ask them. He was no more the beloved prince of Bhanumati bai. Instead, he was now a spoiled prince in a world that offered nothing but cruelty. The world provided him with many paths to walk. Some of them led to hermits, while some showed a way to the temples. However, none of these paths offered him a way back to his own house.
He was now on the streets wandering like a nomad. To gaze at the blazing sun during the day and to spend the night without sleep were the only terrible activities his life offered. The man who had begun his journey of illuminating the world of music was himself facing a life full of darkness. Those were torrid times.
However, there was a need to do something else darkness would have engulfed this shining star of music! It was indeed a question of life and death for Mukulji. Though everything now appeared bleak, Mukulji had the blessings of his late mother Bhanumatibai and his ‘second mother’ Kannamama, and this was the reason he could survive! Finally, he turned to one place which he knew would offer him peace and assure him of a complete loss of contact with the world outside. This place could also offer him some much-needed sleep, as it was quiet, peaceful and serene. It was the ‘Chinmayananda Ashram of Nemavar, a place which is almost at the midpoint of the Narmada parikrama, the sacred Narmada, who Mukulji used to adore since childhood. The guru at the ashram, Shri Shri 1008 Vishwanath ‘Prakash’ Brahmchariji Maharaj always showered his affections for Mukulji.
Earlier, when Mukulji was disturbed after Kannamama’s death, it was Guruji who had consoled him, and since then the former was a regular visitor to the ashram. But back then he was just 15 years old, and he had Bhanukul as his home to go back. Moreover, a glorious future beckoned him, and his life was eager to start on a positive note. But the situation was different today. Ten long years had passed, and Mukul was now without a shelter. He could not go back to Bhanukul. Instead, he had lost everything that he once had. Mukul was at Guruji's feet when he saw him. Guruji lifted him up and held him close to his chest and offered him the much-needed warmth and affection.
It was Guruji who deserved all credit for bringing Mukul back to his usual self. It was for him that Mukul could eventually become what he is today, a Gandharva! He lived in the ashram for five years, from 1982 to 1986. Finally, Guruji’s efforts in making Mukul sing bore fruits! Mukul resumed singing, and his schedule now was to go out, perform and return to the Ashram. During this time, two things ran parallel in his life – music and spirituality. However, this was also perhaps the most dangerous phase of his life. Surrounded by intense stress and pain, Mukul was struggling to live his life by trying to keep his mental balance intact. But his childhood passion for reading helped him a lot. Though his life was without any smile or happiness, books and music had not left him. His colleagues at the Ashram and Guruji were beside him. Slowly and steadily, he was moving away from the troublesome things of the past. And with them, he had left behind many other things – his home, his village, his relations and also his name! Yes, he stopped using ‘Komkali’ as his last name and instead began using his father’s and mother’s name as the last name. He had now become Mukul Shivputra Bhanumatyey. Mukul had lost everything he had a right to, including his last name. One wonders what his fault or what crime did he commit to face this was. In a dramatic turn of events laden with jealousy, Mukul was thrown out of ‘Bhanukul’ and placed at the door of Chinmayadham. Whose karmic sufferings were these? Bhanutai’s? Or Mukul’s? One wonders whether life was fair to Bhanutai, a lady who had lifted the spirits of so many people around her? She was the one who, for her husband’s illness, chose to move from Mumbai to Dewas; who rescued Kumarji from the dreaded disease of tuberculosis (considered incurable during those times) and made him sing again; who chose to work as a principal at Radhabai High school. She not only managed the affairs of the house but also bought a piece of land at ‘Mataji ki Tekdi’ and built a beautiful home for Kumarji. A mother of glorious sons like Mukul and Yashovardhan, why didn’t the auspicious gruhpravesh of this beautiful house occupy a place in her fate? Or maybe this house was deprived of fortune, as its house-maker, with her sons, was ousted from it despite building it from scratch! Instead, this house got its name ‘Bhanukul’ when Bhanutai and Yashovardhan (who was later adopted and nurtured by Bhanutai’s elder sister) left home. On the one hand, this place welcomed many visitors from different parts of the country and also offered shelter to many students at the outhouse in its backyard. But on the other hand, the fate of the house was such that its gruhlaxmi could not enter its premises.